Deploying an Elixir app to Digital Ocean with mix_deploy

This is a gentle introduction to getting your Elixir / Phoenix app up and running on a server at Digital Ocean (affiliate link). It starts from zero, assuming minimal experience with servers.

It builds the app on the server, then uses Erlang releases to run the code under systemd. It uses the mix_deploy library to handle deployment tasks.

We will be using a boilerplate Phoenix project with PostgreSQL database. It assumes you are running macOS on your dev machine and Ubuntu 18.04 on the server.

These instructions are based on this working example application and the principles described in the blog post "Best practices for deploying Elixir apps".

If you have any questions, contact me on the Elixir Slack at jakemorrison or open an issue on GitHub.

You can first get the template running, then prepare your own project for deployment.

NOTE: This guide works with Ubuntu 18.04, CentOS 7, Ubuntu 16.04, and Debian 9.4. If you are not sure which distro to use, choose Ubuntu 18.04. The approach here works for dedicated servers and cloud instances as well.

The actual work of building and deploying releases is handled by simple shell scripts which you run on the build server or from your dev machine via ssh, e.g.:

The defaults for everything else are fine. Click the "Create" button.

Configure ssh to talk to your server

Note the IP address of your new droplet in the Digital Ocean UI.

Configure ~/.ssh/config on your local dev machine so you can connect to the server.

Create a deploy user on the web server

For security, we use two operating system user accounts, the deploy user to build and deploy the app, and the app user to run the app.

Connect to the web server as root:

Configure sudo to allow the deploy user run commands as root without a password:

There are more sophisticated ways to manage users. We normally manage user accounts with Ansible.

Allow the ssh key you set for the droplet root user to log into the deploy user account:

If it doesn't work, check that the ssh key on your dev machine (.ssh/id_rsa.pub) is in the ~/.ssh/authorized_keys file for the deploy user and check the file permissions. Try with -vv or look at /var/log/auth.log on the server.

Make sure that the deploy user can run commands with sudo:

Check out the app source

As the deploy user on the build machine, create the build dir:

Check out the app source:

See the instructions on the Elixir website for more details on installing Elixir and dependencies.

We generally use ASDF to manage build tools. That allows us to precisely specify versions and install multiple versions at once.

Most apps use a database. You can install the database on the same Droplet as you run your app. It works fine and is cheaper, but then you have to manage the db. This guide uses Digital Ocean's managed databases service.

While the database is being created, in the “Getting started” section of the page, click the bullet point that says “Secure this database cluster.” Under “Restrict inbound connections” select your droplet and click “Allow these inbound sources only.” This ensures that only your application server can connect to the database. 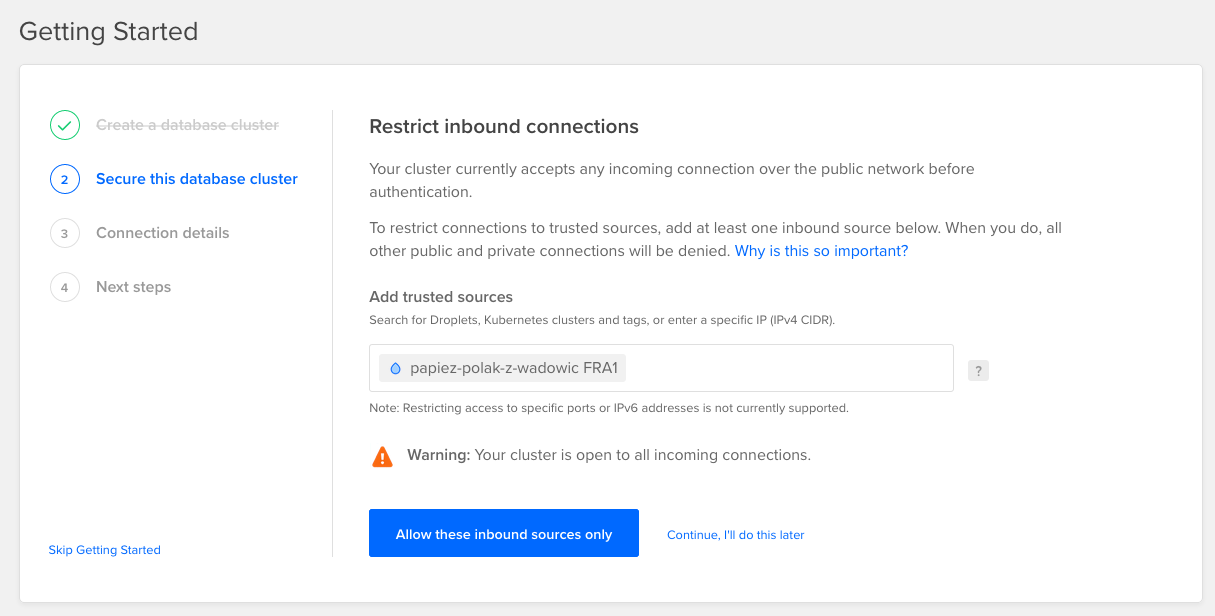 If you are creating a database per app, you can use the defaultdb database and doadmin user that the setup wizard created for you. However, it is better to create a separate database and database user for each app environment.

There are four kinds of things that we may want to configure:

In a simple deployment, you can put all the configuration in config files like config/prod.exs. It will then be compiled into the release package.

When building on a different machine, e.g. a CI/CD system, it's more secure to keep secrets separate from the release and load them at runtime. Similarly, we may want to build a release and run it in a test environment, then deploy it in production.

In these cases, we keep the config outside the release file and load it at runtime. We might read it from environment variables or external config files. Or we might read it from a system like AWS Systems Manager Parameter Store. See "Best practices for deploying Elixir apps" for more details.

On your build machine, build the app by running the build script:

In addition to the normal Phoenix build steps, this command sets up the deploy scripts by running the following mix_systemd and mix_deploy commands:

The configuration is minimal. We just change the name of the OS user that the app runs under to app in config/prod.exs:

Edit config/prod.exs with the runtime settings:

You can generate a unique value for secret_key_base using this command:

Build the app and make a release:

Run this once to set up the system for the app, creating users and directories for releases, runtime configuration, etc.:

As this script changes group membership, you should log out and in again to reload user privileges.

Deploy the release to the local machine:

Check that it works

Make a request to the server:

You can get a console on the running release:

You can also have a look at the logs:

You can roll back the release with the following:

Configure the server to listen on port 80

Listening on port 4000 might be fine if it's behind a load balancer, otherwise we need to make the app available on port 80. There are two ways to do this:

After you complete this step, you should be able to access your website in the browser by navigating to your droplet's public IP address.

The steps necessary to get SSL set up with your Phoenix application depend on the approach that you took in the previous step. If you are forwarding ports using iptables, then you should set up SSL in your application's endpoint, as described in Phoenix docs. You can get an SSL certificate for free from Let's Encrypt.

If you are running behind an Nginx reverse proxy, you should instead set up SSL in Nginx. The necessary steps are described in Digital Ocean's tutorials.

How to prepare your Phoenix app for deployment

Following are the steps used to set up this repo. You can do the same to add it to your own project. This repo is built as a series of git commits, so you can see how it works step by step.

Elixir 1.9 has built in support for creating releases. For earlier versions, use the Distillery library.

Check the rel directory into git.

In mix.exs, tell Mix not to include Windows executables in releases. In the main project configuration, add the option :releases:

Then, in the same file, add a private function that returns your project's release configuration:

Tune the OS for performance

For optimal performance, it is recommended that you increase the default limits for open TCP ports and file handles. Follow the instructions in the post Tuning TCP ports for your Elixir app.

Create a config/prod.secret.exs.sample that you can use to generate production configuration files on the build server:

In order for the bin/deploy-migrate script to work properly, you need to add a migrator module to your project. The instructions on how to do so are described in the post Running Ecto migrations in a release.

If your build server and production server are the same machine, you can also skip this step and just run your migrations with MIX_ENV=prod mix ecto.migrate.

Create a .tool-versions file in the root of your project, describing the versions of OTP, Elixir, and Node that you will be building with:

Add libraries to deps from Hex:

Copy build and utility scripts into your repo

These scripts build your release or install the required dependencies:

This script verifies that your application is running correctly:

Check these scripts into git.

Configure for running in a release

In config/prod.exs, uncomment or add this line so that Phoenix can run correctly in a release:

In the same file, configure mix_deploy and mix_systemd to run your application as the app user. This step is mandatory:

Still in prod.exs, configure your application's endpoint to fetch port number from environment variables. The corresponding variable will be set by systemd:

Confirm that everything compiles by building the app:

You should be able to run the app locally with:

If everything seems to work, you can proceed with deployment just like you did with the mix-deploy-example sample application.